On Thursday September 16 at 8:01 a.m. 2021, Maurice Earnest Tuner Pearson was liberated from this earth. He left behind a wonderful son Jerry and a daughter Toni, a daughter-in-law Shannon, who loved him very much. A beautiful sister Margret Pearson. Wonderful sisters-in-law Shirley Wilson, Cindy Walker and great brothers-in-law Wayne Wilson and Buddy Knee. He will also be missed by his new great-grandson Sawyer. His grandchildren, April, Aimee, Bryanna, Logan and many other great-grandchildren. As well as an uncle to Barbara, Troy, Scott, Chris and Jason. He was someone special who lived his life with humility and dignity, always with a smile and a joke for every occasion. And will be deeply missed by all the hearts that he has touched through his daily and worldly travels. He will be laid to rest on October 2, 2021 at 10:00 a.m. at the Cataraqui Cemetery. Arrangements have been entrusted to Cataraqui Cemetery and Funeral Services, Kingston. Please feel free to share your memories of Ernie online at www.cataraquicemetery.ca

Posted by Signallers Club of Canada at 10:57 PM No comments:

It is with great sorrow that we  announce the passing of Donald Bowman on November 10, 2021 in the Woolcott Wing of the Welland County General Hospital in his 88th year. Don was born in Winnipeg Manitoba November 26 1933, son of Foster and Margaret (Upham)Bowman. He is survived by his loving daughter Cheryl. He was the beloved husband of Elaine (Carruthers) Bowman (died August 12 2020)for 62 years. Survived by brother Bruce (Joy) and half brothers Stuart (Martha) and Geoff Bowman, nieces, nephews and cousins. Predeceased by brother Philip and sister Diane, and half brothers Stephen and Bryce.

Don was a Radio Operator with the RCAF for 24 years and a Corrections Officer with the Niagara Detention Centre for 18 years, former Master of St. George's Lodge, #15 AF & AM and member of Canadian Association of Veterans in United Nations Peacekeeping.

I want to thank the nurses, PSW's and support staff at Welland Hospital who took care of him over the last year.

Cremation has taken place and arrangements entrusted to Passfield Mortuary Services. As per Dad's wishes there will be no visitation. A private service will be held at Victoria Lawn Cemetery in June 2022. In lieu of flowers donations can be made to Diabetes Canada, Heart and Stroke, or the CNIB.
Posted by Signallers Club of Canada at 4:06 PM No comments:

Peacefully with family at his side, Nigel Van Loan returned to the welcoming grace of God on the night of the fifteenth of May, 2022 at the age of 81.Loving husband of Patricia for many years before she was stolen from him by the ravages of ALS on March 6, 2007. Loving father of sons, Ross & Andrew, and the late baby Stewart. Devoted grandfather of grandson and granddaughter, Mitchell & Holly. Dedicated younger brother of Paul, married to the lovely Amanda. And finally, faithful partner of the marvellous Alice.Nigel proudly served Canada for over thirty-four years in the Canadian Armed Forces. After graduating from Royal Military College in Kingston, Nigel commenced his career in the Signal Corps. The bulk of his career was spent within the Signals Intelligence realm helping to protect this nation from foreign aggressions during the Cold War.Nigel was a family man. He would spend time cooking up tasty meals for family gatherings and would be careful to select just the right wine to accompany his creations. Nigel enjoyed spending time and puttering around at the cottage he designed and built at Lake Skootamatta. He was a handyman and there was little he couldn't fix. He was an avid sports fan having played many and coached some throughout his adult life. He was a loyal Toronto Maple Leafs fan and played goalie until at age 75 when he decided that he had pressed his luck far enough and donated his equipment. Being a man of many interests, he was a model railroader, a formidable bridge player and avid gardener. He was well known for his deep singing voice and was never happier than when he was singing with his various choirs. Nigel was a natural leader. Whenever something needed to be done, Nigel would soon find himself in charge. He was an adventurer at heart and loved travel. His military career took him and his family to some far flung places on the globe but Nigel always made the most of those assignments and introduced his family to his love of discovering new things. Some of his fondest memories were trips he took with his two sons to visit Civil War locations which he would research thoroughly ahead of time. Nigel always found time for charity work because he enjoyed helping others. Even though he has departed, his love continues to sustain us and the example of how he lived his life helps to light our way.Donations can be made through the ALS Society Ottawa or Hospice Care Ottawa.

Posted by Signallers Club of Canada at 7:57 PM No comments:

Little Green Monster, Paratrooper, Ultralight Aviator, Rabble Rouser, and Argument Winner. Beloved Husband of 61+ years to Joanne and Father of Anthony (Karen). Bob made his final jump from this world to the next, April 6, 2022.

Bob joined the Canadian Army in 1953 as a Soldier Apprentice, made his first parachute jump at the age of 18 and served this nation honorably for the better part of 4 decades, including service in Egypt 1965 - 1966, Cyprus 1974 and Germany 1984 - 1987. In 1968 he was an original member of the Canadian Airborne Regiment.

Bob was a lover of animals; strays were attracted to his Inverary yard knowing they would find sanctuary or at the very least, treats. An avid reader, Bob considered learning to be a continuous process. The Salvation Army held a special place in his heart for the assistance they gave his family when he was young and his was a familiar face around Kingston manning a Kettle every Christmas. Service was in his blood.

There will be no funeral however a celebration of Bob's life will be held at a future date.

As an expression of sympathy; donations to The Salvation Army or The Military Communications and Electronics Museum Foundation would be greatly appreciated.

Our grateful thanks to the Doctors and Nurses on Davies 4 at KGH.

Posted by Signallers Club of Canada at 10:36 AM No comments:

Bob Janik has suffered a massive stroke and is not expected to recover.  He has been taken off life-support.

Posted by Signallers Club of Canada at 9:37 PM No comments:

Lonely Are Our Hearts Today

Lyman George Laxson (Lefty), peacefully passed away in his 94th year at Riverwood Senior Living Retirement Home in Alliston, Ontario, on March 9th, 2022.  Pre-deceased by his son Larry (2019) and wife Lorna (Nee Hughes in 2020).  Dear Father of Linda Monks (Bruce) and Howard Laxson (Jocelyne).  Loved Grandpa to Jason Hughes (Shannon), David Hughes, Charlene Hébert (Nick), and Jeffery Laxson (Isabelle).  Great-grandpa to Maxime, Zhoé and Mya Hébert, Elizabeth and Malcolm Hughes, Corey and Emma Laxson. Lyman will be lovingly remembered by his sister Joyce Knowles (Mac), Sister-in-law Jean Hughes and Brother-in-law Donald Hughes, as well as many nieces and nephews.He grew up in the small towns of Asbestos and Danville in the Eastern Township of Quebec.  Often remarking about how it was a “young boys dream”.  Plenty of fishing, hunting, skiing, hockey and camping.  After finishing school, he moved to California to seek employment.  While there he enjoyed diving for Abalone while living in Long Beach, cruising in Los Angeles on his Harley.  When it was time to return to his home town of Danville, he went to work in the Asbestos Mine.  That was short lived and it wasn’t long before he enlisted in the Canadian Armed Forces.  During his time in the military, he and his growing family were posted to CFB Borden three different times as well as Petawawa, Valcartier and Kingston.  He did a year in Egypt with the NATO Peacekeeping Forces and later deployed to Montreal during the FLQ Crisis.  After retirement from the military, he joined the Canadian Correctional Service.  Moving to Kingston to serve at Joyceville Medium Security Institution. Retiring for good, chalking up a total of 38 years of public service.But Lefty was not all work and no play.  He loved his motorboat, photography and the Toronto Maple Leaf's.  Hunting for antiques with Lorna and listening to his collection of Big Band and Jazz records.  Also, in the day no house party was ever complete without his very lively rendition of Boogie Woogie on the piano and a glass of homemade Saki.  It was not long ago the he remarked “What a wonderful life I have had”.  We could not agree more.

Posted by Signallers Club of Canada at 9:45 AM No comments: 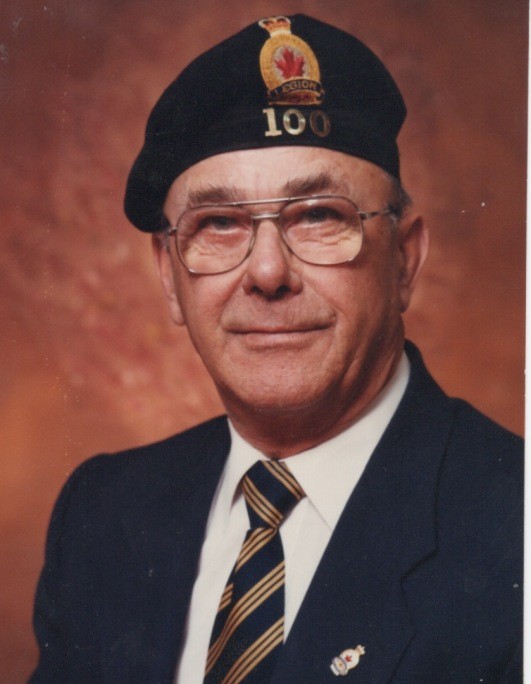 Henry Edward Doucet passed away peacefully at the Robert L. Knowles Veterans Unit, in Bathurst, after a brief illness. He was just 3 months shy of his 99 th birthday. Henry is survived by his wife, Ruth (Guitar) Doucet of Bathurst, his family Marcia (Laurent), Joanne, Joyce (Rob), Ken (Debbie), Kirk (Janice), John (Della), Sean and eight grandchildren: Jason, Amanda, Chrystiane, Nickey, Josh, Jessie, Deven and Connor. He is also survived by many nieces and nephews, one of whom, John Doucet, also made a career in the military. Henry and John spent many hours over the years “talking military”. Their conversations were a high point for Henry.

He was predeceased by his first wife, Margaret Patricia Brown (1924 – 1993) from Jacquet River, his sister, Betty Bourque and his brothers, Alex, Hector, Alphonse and Wilfred. Henry was born in Petit Rocher to the late Joseph and Marie (Savoie) Doucet. He spent the first 17 years of his life in Petit Rocher until enlisting in the Canadian Armed Forces in 1940. He served in the Signal Corp, in England, during World War II. Henry remained in the military until his retirement in 1969 and was a member of the Royal Canadian Legion Branch 77 in Jacquet River.

He enjoyed listening to music and dancing with Ruth. They both shared a love of travelling and over the years drove across Canada several times and down into the United States, visiting Florida, Texas, California and all states in between. Henry loved nothing more than to be behind the wheel of his car, Ruth beside him and the open road beckoning. The family would like to thank the friendly, caring staff at the Robert L. Knowles Veterans Unit who administered to his every need. A special thank you for putting a bird feeder on Henry’s window. It provided him with many hours of pleasure.

A funeral service will be held at the St Gabriel’s Church in Jacquet River at on March 18 th at 2pm. Funeral arrangements are in the care of MacMillan’s Funeral Home, Black Point.

Asking all Legion members to meet 20 minutes before funeral for Legion service.