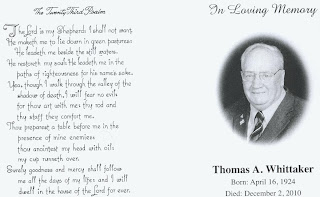 Sadly online searches indicate the tragic death on the evening of 2 December when his body was found in a burned out mini van near Kingsville.

WHITTAKER, Thomas A. It is with great sadness that we announce the passing of our father Tom. Born at home April 16th, 1924 in Leamington, Ontario. Passed away suddenly Thursday December 2nd, 2010 at the age of 86 years. Late of Kingsville, Ontario. Reunited with the love of his life Clara (1995). Loving companion of Geraldine. Survived by his children Brian and Cathy, Rosemary and Gerry, Paul and Ann and Craig and Rainy. Grandpa to Wendi, Shaun, Caleb and Justin. Great grandpa to Emily and Zac. Predeceased by parents George and Annie, brothers Phillip, Leonard, William Stanley, brother-in-law Phillip and niece Elizabeth. Dear brother of Ester, Eileen and Doug. Also survived by sister-in-laws Dorothy of Leamington and Lillian Campbell of London. Predeceased by brother-in-laws Carl and Oscar and sister-in-law Florence. Dad was a proud veteran of WWII fighting in Holland and remained in the military until 1966 when he moved his family to Kingsville. Proud Legion member of Branch 188, Kingsville, Ontario. Dad worked at Kingsville District High School for several years before accepting a position with the University of Windsor until his retirement at the age of 66. Dad had a great love of sailing and was one of the founding members of the Kingsville Yacht Club.

May he rest in peace.
Posted by Pete Scott at 11:09 AM No comments: