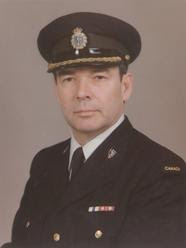 READER, Thomas James (Ret.) Colonel - Passed away peacefully at KGH on the 24th of August 2011 in his 81st year. Loving husband of Frances (Frankie) Gillissie, cherished father of Kelly Laforest (Marc) and Leslie Dupre (Jon) and proud grandpa of Alexandra, Chloe and Sydra. Tom was predeceased by his first wife Margaret, his son, Terry James and his sister Norna Eidsness. He will be sadly missed by many including his numerous nieces and nephews and of course his dog, Roxy. The family will receive friends and family at the James Reid Funeral Home (1900 John Counter Boulevard) from 2:00 to 5:00 on Sunday, August 28th. Mass of Christian Burial will be celebrated at St. Paul the Apostle Church (1111 Taylor Kidd Boulevard) on Monday at 11:00am, reception to follow at St. Pauls. Cremation to follow. As expressions of sympathy, donations to the Communications and Electronics Branch, Kingston, Ontario, Canada, the Lewy Body Dementia Foundation, or the charity of your choice in Thomas' memory would be appreciated by the family
Posted by Pete Scott at 9:01 AM No comments:

WO1 GS (Sam) Kennard,retired- Royal Signals. Silent Key--Sam passed away yesterday,16 Aug 2011, in England from an aneurism. He was an avid ham radio operator,G4OHX, and operated his station from many different locations around the world. During the visit of Princess Anne at our 100th Anniversary we had Sam operating VE3RCS when she visited the Museum. He was a great supporter of the Signallers Club and unofficially acted as our liaison in the UK. He served his country with the Royal Signals and retired as the RSM of the British Signals Airborne Regt. One of my great thrills was to contact him "on-air" by phone and CW (he sure had to slow down for me to copy)

Terry, VA3TRM
Posted by Pete Scott at 8:43 AM No comments:

Born July 24, 1926, passed away peacefully at St. Mary's of the Lake with the support of his family on Wednesday, August 3, 2011, shortly after his 85th birthday. Dear & loving husband of Brenda (nee Connolly) and cherished father of Beckie Harrison (Brian) of Ottawa; Stephanie Hook (James) of Sydenham; Bob (Mina) of Campbellford and Brenda Murphy (Chris Burke) of Dunrobin. Much loved Papa of Emily, Ben, Lauren (Jeremy), Sean, Brian, Jeffery, Jessica and Sarah. Brother of Katherine Burgess and John Murphy and predeceased by his sisters Helen, Charlotte, Margaret and Pat. Son of the late William & Agnes Murphy. The family will receive friends at the WARTMAN FUNERAL HOME “Kingston Chapel“ (980 Collins Bay Road at Taylor Kidd Blvd.) Kingston, ON - K7M 5H2 (613- 634-3722) on Saturday, August 6 from 10- 11 am. Liturgy of the Word to follow in the Chapel at 11 am. Reception to follow. Interment at Glenhaven Memorial Gardens. Donations to the Salvation Army Christmas Basket Fund or St. Mary's of the Lake Hospital will be remembered with appreciation by the family. Heartfelt thanks to Dr. Susan Sangster-Gibson, Dr. Ivan Stewart and staff of 2 South at St. Mary's of the Lake for the care and support to Dad and all of our family.

Bob retired as RSM of the School and was previously SSM of 1 CMBG HQ & Sigs Sqn,Calgary. He worked as a lineman for many years and as an instructor for the trade, he is fondly remembered by the lineman as one of the best "pot wipers"(lead) in the trade and he passed this knowledge to many of us. Lineman Forever.
Terry Murphy
Posted by Pete Scott at 4:55 PM No comments:

John was LM186 and had the great "honour" of being my Troop Sgt in E-19,1957. For some reason he survived that. John was a nice man and will always be remembered. Terry

SELMAN, Horace John (British 1st Army and RCCS) - Peacefully at Trillium Centre on July 29, 2011 in his 89th year. Beloved husband of Nellie. Beloved father to John and Judy (nee Clooney). Cherished Popa to Kimberly (Harm) Nouwens and Michael (Andrea) Selman. Great Popa to Matteus, Maiya, Mitchell and Willem. Dearly remembered by his sister Dorothy (Bob) Stirling of British Columbia, Fondly remembered by his sisters-in-law Madge (Harold) Charles and Jean (Paul) Cutts, and niece Phillippa (Rob) Bellhouse, all residing in England. You will always be in our hearts. At John's request there will be no visitation and service. Cremation followed by interment by Nellie's side at Glenhaven Memorial Gardens. As an expression of sympathy, donations may be made to the charity of your choice in John's memory.
Posted by Pete Scott at 2:47 PM No comments: