Left to mourn his passing are his loving wife Irene, daughters: Dianne (JC), Gail (Butch), Beverly (Robert) and Barbara (Joe), 4 grandchildren and 3 great-grandchildren, as well as 2 brothers and 4 sisters and numerous nieces and nephews.

Dave was a member of the Canadian Forces for over 25 years serving in Canada, Europe and several peace keeping missions around the world. He was also a veteran of the Korean Conflict. Although retired from the military for many years, he still considered his life as a soldier his one true career and continued his association through military clubs and events.

A memorial service will be held at 2 PM, October 1st at Evergreen Funeral Chapel – 16204 Fort Road, Edmonton. Friends and relatives intending to attend are asked to contact Dianne or JC at 780-967-5014 or via E-mail: J-C-M@hotmail.ca. In lieu of flowers please consider donations to the Canadian Cancer Society or the Military Communications and Electronics Museum, Kingston ON.
Posted by Pete Scott at 6:49 PM No comments:

KEDDY, Wilfred Noel “Bud“ - Surrounded by love, Bud died peacefully at Kingston General Hospital on Friday September 9, 2011. Bud was a loving husband to Eleanor for 54 years. He will be greatly missed by his family, daughter Debbie (John) Gillis and son David (Darlene) Keddy. Bud was so proud of his grandchildren, Tim(Jenna), Jackie Gillis, Chrissy Keddy and his great- grandchild Kaiden. Bud has joined Julia in heaven. He was predeceased by his parents Charles and Irene Keddy. Bud was a proud member of the military and a financial planner. He loved life and fought many illnesses to stay with us as long as possible. Family and friends will be received at the GORDON F. TOMPKINS FUNERAL HOMES - 435 Davis Drive (Taylor Kidd Blvd. & Centennial Drive) on Sunday, September 11, 2011 from 2-4 & 7-9 p.m. A funeral service in our chapel will be celebrated on Monday September 12, 2011 at 10:00 a.m. Cremation to follow. Final place of rest Glenhaven Memorial Gardens. For those wishing, donations may be made to the U.H.K.F. - Kingston General Hospital for their excellent Care or to the Parkinson's Foundation in memory of Bud. “He will be missed and always in our hearts
Posted by Pete Scott at 3:38 PM No comments:

Motorcycle of the Dispatch Rider 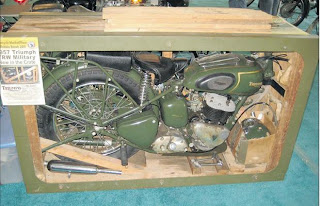 Full story available click here by Nigel Matthews is the Director of Marketing and Sales for Hagerty Classic Car and Boat Insurance Canada (www.hagerty.ca). Contact him at nmatthews@hagerty.com

The Triumph motorcycle company began designing its 500cc TRW model in 1943, but by the time the bike went into production the Second World War was over and the British military had a surplus of motorcycles used by dispatch riders.

Many were used by the military in countries around the world, including, Canada, Germany, Holland, Pakistan and South Africa. This incredible find was at the Mid-America Motorcycle auction in Monterey last month. The pictured 1957 Triumph TRW came out of Canadian Military storage approximately 40 years ago, and has never been out of the original factory shipping crate. This twin cylinder Triumph has chrome wheel rims and gold pinstriping accenting the green paintwork. It is supplied with the complete tool kit and other accessories, including the hardbound owner's manual and sold for $34,500.

One has to wonder what its new owner will do with it. Leave it in the shipping crate making it a fantastic museum piece, or remove it and assemble it? With a mere 15 test miles added by the factory, if the new owner rides it, every mile added to the odometer would devalue it. Tough decision.

How many Sigs Club members drove one?
Posted by Pete Scott at 5:37 PM No comments: