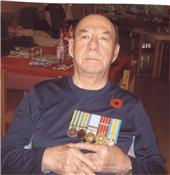 With deep sadness we announce the passing of George. He was predeceased by his loving wife Margerite Verna Vieau. Left to cherish his memory are his children Don (Linda), Brad, George (Kathy), Bob (Sandra), Chris (Cindy), Rod (Tammy), and Sandra (John) as well as many other extended family, and friends.


, William Herbert of Comox BC passed away at St. Joseph's Hospital on April 11th 2010. He was born in Montreal on 27 August 1924. Bill served in the Canadian Army Signal Corps during WWII having enlisted in January 1942 at 17 years of age (he convinced his mother to lie about his age). He served more than four years overseas in England, France, Belgium, Holland and Germany and was responsible for sending the 'Cease Fire' order to Canadian, British and Polish forces on 4 May 1945 and was always proud that the Germans surrendered to the Canadians prior to surrendering to American and British forces three days later.

He returned to school after the war and re-entered the service with a commission in 1951 whereupon he joined the war in Korea. He spent the next twenty years with the Armed Forces at various locations in Canada and Europe and retired from service in 1969. He and his wife Regine (whom he met and married while serving in Holland and pre-deceased him) spent the ensuing years living in Europe and later Ontario and BC. He is survived by his son Douglas, daughter Jennifer, five grandchildren and a great-granddaughter.

Special thanks go out to Dr. Mateus of whom Bill had great appreciation as well as his colleagues and staff. Also to the nurses and staff at St. Joe's as well as the volunteers and members of the Hospice Society. A celebration of his life will be held Friday July 2nd at 1:00 pm at St. Joe's Hospital Chapel. If friends so desire in lieu of flowers, donations may be made to The Alzheimers Society of BC, 300-828W 8th Ave., Vancouver, BC V5Z 1E2 in memory of Bill and Rini Biggs.

Posted by Signallers Club of Canada at 1:50 PM No comments: